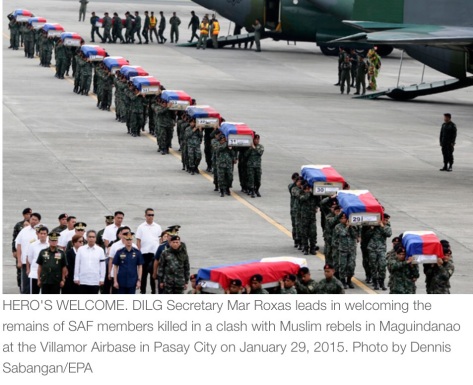 MANILA, Philippines (The Adobo Chronicles)  – While the bodies of 42 police officers slain in an encounter with lawless elements in the southern island of Mindanao arrived at Villamor Airbase  in Manila yesterday, President NoyNoy Aquino was toasting champagne with top business executives a few miles south of the capital.

Somber and solemn ceremonies were held to honor the police officers — members of the Special Action Force who were practically wiped out in a surprise encounter with the rebels.

Most of the guests, including VIPs and relatives of the slain cops, donned black ribbons on their left arm. 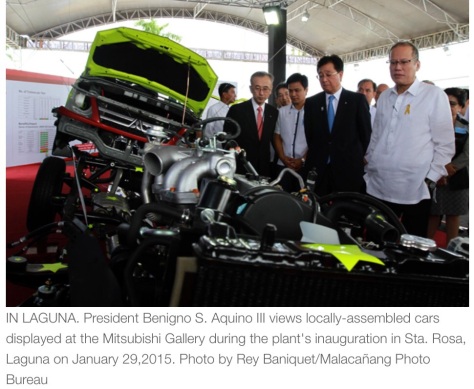 Aquino, on the other hand, was hobnobbing  with executives of Mitsubishi at the inauguraton of the car manufacturer’s new plant in Santa Rosa, Laguna.

“I wouldn’t miss Dom Perignon for anything,” Aquino said, referring to the top brand champagne served at the elaborate event. The president was also very delighted to see a display of the latest Mitsibishi Lancer.

For Aquino, it’s business as usual — literally and figuratively. 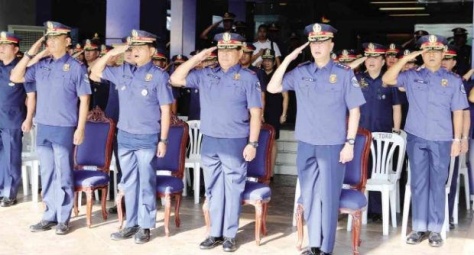 Quezon City, Philippines (The Adobo Chronicles) – In Hollywood, we have the fashion police. In the Philippines, the police are fashionable.

Today, the Philippine National Police (PNP) unveiled the new uniform that will be donned by all members of the police force. It is a design that combines several fashion ideas put forward by some of the country’s top designers, the same artists that design gowns for beauty pageant contestants, movie stars and political matrons.

In soliciting ideas for a new police uniform, PNP asked designers for ideas that would take into account the hot and humid temperature in most cities and towns in the Philippines, as well as the beer bellies characteristic of most police officers.

“The PNP pretty much concedes that many police officers are unable to shed off the extra pounds or shrink their mid-sections since accepting bribes or extorting money to help support their beer and appetizer addictions has become the norm,” a PNP spokesperson said.

The new design fulfills PNP’s requirements as it uses a cooler cotton material and lighter color while creating the illusion of flat bellies with its untucked design.

Quezon City, Philippines (The Adobo Chronicles) – With hundreds facing jail time in connection with the 10 Billion-peso pork barrel scam, the Philippines is facing an acute shortage of jail cells and detention facilities, it was announced today.  In addition to the three senators and their associates who have recently been indicted of plunder and other crimes, many more are expected to be named by the Ombudsman for their involvement in the elaborate scheme to siphon taxpayer money into ghost projects and the pockets of politicians that include other senators, congressmen and Aquino administration officials. Rumor has it that more than half of sitting senators and over a hundred congressmen have been implicated in the scam by suspected mastermind Janet Lim-Napoles.

The announcement of the jail shortage was made  as media reporters were shown the refurbished bungalows inside Camp Crame which will serve as detention facilities for Senators Juan Ponce Enrile, Jinggoy Estrada and Bong Revilla, Jr. — all of whom were indicted for non-bailable plunder in connection withe pork barrel scam.  Camp Crame is the headquarters of the Philippine National Police and is located along EDSA — the boulevard that was the center of the people’s power revolution that ousted the late dictator Ferdinand E. Marcos.

As a way of dealing with the jail shortage, Justice Secretary Leila de Lima ordered the sequestration of the condominiums owned by Napoles. The windows and doors of the condo units will be fitted with iron bars, and door locks will be replaced with heavy bolts.  They will be emptied of all furniture except for a banig (straw mat) to serve as sleeping mat and airconditioning in the units will be totally disconnected.

As to who will be detained in these “condo jails,” de Lima said that the decision will be left to the courts.  However, de Lima added that due to a conflict of interest, Napoles will not be eligible for detention in her own condo. Napoles is currently in detention at another “bungalow jail’ at Fort Sto. Domingo, a police camp in Santa Rosa, Laguna, south of Manila.