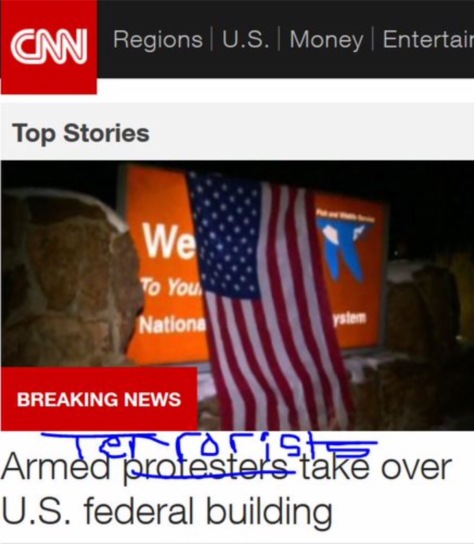 SILIC0N VALLEY, California (The Adobo Chronicles ) – The Silicon Valley-based Adobo Chronicles is pleased to announced that it is sponsoring and hosting a free seminar for the media on the issue of terrorism coverage. The seminar will be held at the San Jose Convention Center on Monday, January 4, 2016.

The seminar will help media companies develop skills to be able to distinguish between terrorism and peaceful protests.

The Chronicles decided to sponsor the event after major news networks like ABC  and CNN  as well as the Associated Press (AP) reported on the take-over by armed militants of a federal building in Oregon to protest the conviction and jail sentence of an eastern Oregon ranching family for arson.

The media companies, who are quick to label any violent incidents, especially those perpetrated by people with foreign ties, as terrorist activities, have treated the Oregon incident as nothing but a peaceful protest.

Media companies interested in sending their editors and reporters to this free seminar are asked to register at AdoboChronicles.com

That’s what happened yesterday as hundreds of protesters rallied at City Hall for a temporary halt to evictions in a popular San Francisco neighborhood where workers in the booming technology sector are accused of pushing out long-time tenants.

The protesters, chanting and screaming in English and Spanish, want a one-year halt on tenant evictions in the diverse Mission District and a two-year moratorium on construction of expensive high and medium-rise condos and other market-rate developments.

They then entered the building and evicted Mayor Ed Lee and all of the members of the city and country board of supervisors.

When City Hall officials called the police department to stop the evictions and restore peace and order, they were informed that 90 percent of the police force, most of them residents of the Mission District, went on leave. They were among the protesters.

Once again, the City by the Bay showed the country — and the world — how things ought to be done. Or undone.

Bangkok, Thailand (The Adobo Chronicles) – A cinema chain in Bangkok has cancelled screenings of the new Hunger Games film after protesters adopted the movie’s three-fingered defiant sign against totalitarian rule.

Activists say police ordered the move after hundreds of students planned to protest at an opening day screening of The Hunger Games: Mockingjay Part 1 on Thursday. Thailand has been under military rule since May, and authorities have banned the salute as part of an ongoing crackdown on pro-democratic dissent. 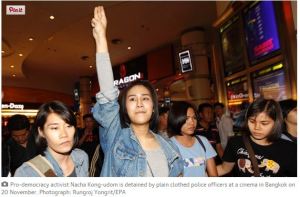 The students were obviously disappointed at the film cancellation. They have been waiting a long time to see the popular new film that stars Academy award-winning actress Jennifer Lawrence. They appealed to the cinema chain and the police to bring back the screening of the blockbuster film series.

As a compromise, the students promised to change the symbol of their protest from the three-fingered salute to the Hawaiian shaka sign.  They were hoping that the Thai military government would be more tolerant of the laid-back, less intimidating symbol of Aloha.