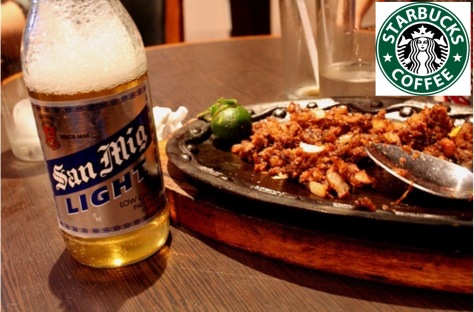 Not to be outdone, Starbucks Philippines has announced that effective this Friday, its locations across the country will start serving San Miguel Beer, along with a Filipino favorite appetizer, sisig. The new menu will be available every day after 5 p.m.

As part of its initial promotional period, Starbucks will serve complimentary sisig for every bucket of San Mig Light purchased by customers.

Customers under the age of 21 will not be allowed to purchase beer, but senior citizens will be entitled to the usual 20% off.

MIAMI, Florida (The Adobo Chronicles ) – Florida Senator Marco Rubio is a fast-rising star in the Republican Party. The presidential candidate is expected to eventually capture his party’s nomination — after all the hype and hysteria that put GOPers Donald Trump and Ben Carson on top of the polls subside and voters finally come to their senses.

Slowly but surely, Rubio is showing the kind of stuff he’s made of — youth, intelligence and experience that will take him to the Oval Office.

Yesterday, Rubio fielded questions at St. Anselm College in New Hampshire. One of the questions he was asked was who he would like to “have a beer with” out of anyone in the world who is not a politician.

Rubio said he would like to have a beer with football legend Dan Marino, Russian chess prodigy Gary Kasparov and Nobel Peace Prize winner Malala Yousafzai.

Of course, Rubio’s advisers and campaign staff failed to whisper in his ear that Malala, the famed Pakistani girls’ education activist, is both underage and Muslim. She is also socialist.

Under-age drinking is illegal, Muslims don’t drink alcohol, and Rubio is farthest from being a socialist.

Three out of four women said that they would rather have a man with love handles than one who has a six pack. According to those surveyed, men with beer bellies have better personalities and that men who are in good body shape spend more time in the gym than with their significant others.

The survey was conducted to mark the DVD release of the film “Bad Neighbors” which stars Zac Efron as a buff college boy and Seth Rogan, as a chubby family man.

Soon after results of the survey were made public, bars and clubs in London and other parts of Europe reported a sharp increase in their beer sales, while gyms and health clubs have noticed a decline in memberships.

While this phenomenon just started being noticed in Europe, many believe that it will spread quickly to other continents, thanks to the survey.