LONDON, United Kingdom (The Adobo Chronicles, Berlin Bureau) – As she celebrated her 90th birthday, Queen Elizabeth had a message to Great Britain’s LGBT community: don’t travel to the U.S.A.

The gay-friendly queen mother was reportedly pissed at the growing anti-LGBT sentiment in America, particularly in two states which recently passed discriminatory legislation against those who pledge allegiance to the rainbow flag.

But it was not only the Royal Palace that cautioned lesbian, gay, bisexual and transagender citizens about travel to America.  The British Foreign Office also issued — for the first time — a travel advisory specifically addressed to the LGBT community. It warned travelers to be aware of controversial new laws in North Carolina and Mississippi before visiting the United States.

Although the advisory was directed at North Carolina and Mississippi, organizers of Pride celebrations across the U.S. — from  San Francisco to New York — are weary that there will be less attendance in their respective celeberations this June. 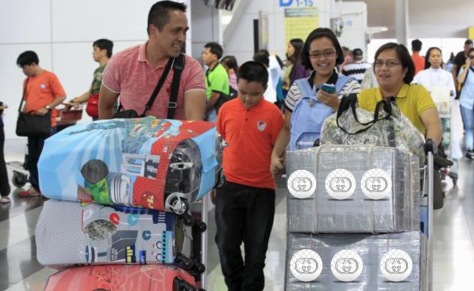 MANILA, Philippines (The Adobo Chronicles) – Many people want to travel in style, wearing designer clothes, accessories and bags to express their fashion flair. But travelers to the Philippines are frustrated that they can’t show off their Gucci and other designer luggage and purses because of the laglag bala scheme at Manila’s Ninoy Aquino International Airport (NAIA).

The scheme involves airport personnel allegedly ‘planting’ bullets in bags of unsuspecting passengers for the purpose of extorting money.  This has prompted passengers to wrap their luggage in plastic, all but covering the designer logos that they paid lots of money for.

So the next time you fly in or out of NAIA, make sure to wrap your check-in and hand-carried bags  or balikbayan boxes in Gucci plastic wrap.  Don’t leave home without it!

MANILA, Philippines (The Adobo Chronicles® ) – Who needs to go to Brazil to visit the Amazon rainforest? Tourists can now have that experience in the Philippines, just by riding the MRT, Metro Manila’s light railway system.

Today, MRT officials unveiled the world’s first tropical rainforest-themed train. Lucky commuters who were picked through a lottery experienced the inaugural ride from Quezon City to Makati, drenched in refreshing water that poured from the train’s ceiling.

“They should have thought about this sooner, ” one commuter said, adding, “It is a great way to beat the hot and humid weather and remain fresh and cooled upon reaching your destination.”

The lucky commuters were given complimentary towels with the logo of the Office of the President at the exits.

During the train’s  regular runs, however, commuters have to bring their own towels.