WASHINGTON, D.C. (The Adobo Chronicles, Washington Bureau) – Until yesterday, applicants for U.S. citizenship had to study 100 civics test questions from which the immigration officer will ask 10, and the applicants must answer at least 6 correctly.

Passing the citizenship exam will not be based on correct answers.  Rather, it will be based on a determination of whether the potential U.S. citizen is Authoritarian, Leftist, Rightist or Libertarian, as shown in the quadrants below:

In order to pass the test, the applicant must at least fall somewhere in, or close to, the lower left quadrant — meaning that he or she must be closer to being a Leftist and Libertarian.

The new test questions were developed in consultation with top Republican and Democratic candidates for president, namely, Hillary Clinton, Bernie Sanders, Donald Trump and Ted Cruz.  They reflect the changing attitudes of Americans towards immigration and the war on terror.

Citizenship applicants are encouraged to review the new test questions before their scheduled interview.

HERE are the 63 test questions. 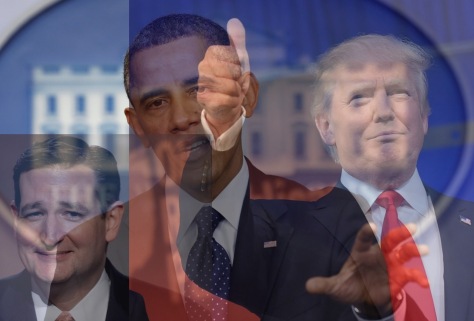 Undocumented families in the U.S. could be rounded up and deported , according to a report that has shocked immigrants rights’ advocates and provoked condemnation from Democratic presidential hopefuls.

The Department of Homeland Security is preparing for raids that would see hundreds of recently arrived immigrants deported, according to a report in The Washington Post.

Citing anonymous sources, the report said that adults and children “would be detained wherever they can be found and immediately deported”.

The operation would focus on people who entered the US from its south-west border since the start of 2014, many of whom are assumed to be escaping gang violence and institutional collapse in Central America. It would also focus on people who have already been ordered to leave by an immigration judge, according to the Post.

The White House would not confirm if the Obama plan was meant to replace these undocumented immigrants with the 10,000 Syrian refugees that the president had previously announced would be allowed into the country.

“Finally, Obama has come to his senses,” Trump said, emphasizing that “the deportation of undocumented immigrants and creating a border wall to prevent illegal immmigration have always been part of my campaign agenda.”

However, Trump said that the Obama administration’s deportation announcement does not go far enough.

“We need to do more.  We need to also deport  Americans — especially those running for public office — who have divided loyalties between  America and their foreign place of birth or lineage,” the real estate mogul stated.

Trump was obviously referring to his closest rival in the 2016 U.S. presidential race, Senator Ted Cruz, who was  raised in Texas but born in Canada to a Cuban father.

Upon learning of Trump’s comments, Cruz told The Adobo Chronicles: “Look who’s talking.  Here’s my challenge:   I will self deport if Donald does the same.”

Trump was born to a German father and Scottish mother.

SAN FRANCISCO, California (The Adobo Chronicles ) – Teenage idol Justin Bieber has lined up  a series of concerts in California in March next year at  venues in Los Angeles, Sacramento, Oakland and San Jose.

But sources close to the Canadian singer who spoke on condition of anonymity, said that Bieber will cut short his concert tour after his performance at the Oakland Oracle Arena on March 18, virtually cancelling his two scheduled concerts at the Staples Center in Los Angeles on March 20 and 21.

Instead, Bieber, who has had many encounters with U.S. law enforcement because of his behavior, will proceed to San Francisco to seek refuge from U.S. Immigration officials.

Bieber has repeatedly been charged with misdemeanors and violations including driving under the influence (DUI), resisting arrest and drag racing.

In 2013, the then 19-year-old Bieber was caught on camera urinating in a mop bucket as he and others raced through a New York City restaurant kitchen. Before exiting, Bieber sprayed a photograph of Clinton and dropped the F-bomb in reference to the former president.

The Department of Homeland Security’s Citizenship and Immigration Services (CIS) is reportedly monitoring Bieber’s activities and is planning to revoke his work permit.

Fearing deportation, Bieber has decided to avail of San Francisco’s Sanctuary policy which prevents non-U.S. citizens from being handed over to law enforcement agencies to face crimes committed in the city or elsewhere in the U.S.

San Francisco Mayor Ed Lee told The Adobo Chronicles  that the City by the Bay remains committed to its sanctuary status and welcomes the addition of Bieber to the growing number of high-profile celebrities that have chosen to make San Francisco their home sweet home.