WASHINGTON, D.C. (The Adobo Chronicles, Washington Bureau) – U.S. Treasury Secretary Jacob J. Lew on Wednesday announced the most sweeping and historically symbolic makeover of American currency in a century, proposing to replace the slaveholding Andrew Jackson on the $20 bill with Harriet Tubman, the former slave and abolitionist, and to add women and civil rights leaders to the $5 and $10 notes.While Hamilton would remain on the $10, and Abraham Lincoln on the $5s, images of women would be added to the back of both .

Today, Lew unveiled a prototype of the new $10 bill.

Can you name all the women featured on the back of the bill?

CHAPPAQUA, New York (The Adobo Chronicles, Washington Bureau) – International Women’s Day was quite a day for Philippine Senator Grace Poe. On this very day, the Supreme Court ruled, by a 9-6 vote in her favor, paving the way for the foundling and former dual citizen to run for president.  The high court threw out the disqualification case against her by respondents who claimed she was not a natural-born citizen and lacked the residency requirement to run for the country’s highest office.

Just hours after she learned of the court decision, Poe received an overseas call from Hillary Clinton, former U.S. First Lady, Secretary of State and now candidate for U.S. president.,

During that 3 a.m. call, Clinton informed Poe that she was endorsing her candidacy for Philippine president and that she was looking forward to meeting her in person when both of them have become presidents of their respective countries. “I would love to be your roommate during the world leader summits that we will be both attending,” Clinton told Poe.

Today, Poe returned the favor and officially declared that she was endorsing Clinton not only for the Democratic nomination but for the presidency.

Poe said she is looking forward to be in the company of many women world leaders, adding that it was about time that women were taken more seriously to be heads of state.

If elected, Clinton will be the first female U.S. president, while Poe will be the Philippines’ third, following in the footsteps of Cory Aquino and Gloria Macapagal-Arroyo. 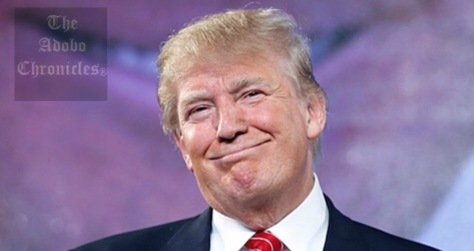 LAS VEGAS, Nevada (The Adobo Chronicles, San Francisco Bureau) – Americans know by now that Donald Trump has embarked on an unconventional campaign to become the Republican Party’s nominee for president of the United States. So far, he has had nothing but success.

To our surprise, Trump has agreed to sit down, one on one, with the editorial board of The Adobo Chronicles in what is probably the most no-holds-barred interview given by the frontrunner candidate since he first announced his presidential bid.

Here is the full transcript of our interview with Trump:

AC: Hillary Clinton has accused you of being racist because of your strong stance against illegal immigration. Any comments?

DT: Hillary has gone mad and desperate. She is a very angry woman. She has blood coming out of her eyes, her ears, her mouth and from her you-know-what.

AC: Do you think you can win a general election without the increasingly powerful Latino vote, considering your disparaging comments against Mexicans and undocumented immigrants?

DT: I love the Mexicans and the Mexicans love me. I have thousands of Mexicans working for me in New York, Florida, Nevada, Hawaii, and in all my hotels and casinos. If they want to keep their jobs, they know what to do come November.

AC: You have have been criticized for your misogynistic comments, including those directed against Rosie O’Donnell and Megyn Kelly. Do you think you can win women’s votes?

DT: I love women and women love me. I love my wife, including my exes. I love my daughter and if I weren’t her father, I’d date her. I have made many women world-famous during the many years that I was owner of the Miss Universe Beauty Pageant. I may be criticized for my looks but I have a very keen eye for beauty. No one is more qualified to be president of America the Beautiful than Donald Trump.

AC: Your political opponents say that you do not have enough foreign policy experience and that your kind of CEO-like diplomacy will never work with other heads of state.

DT: What is your question?

AC: Do you think you will be able to represent Americans on the world stage?

DT: Those who say I have no foreign experience don’t know what they’re talking about. I have properties and businesses all over the world — in Canada, Panama, Scotland, Ireland, Brazil, Indonesia. As a businessman, I’ve dealt with the toughest of people. I know how to deal with the Iranians, the Chinese and with Kim Jong-un of North Korea. I don’t need diplomacy. I say what I want to say. I don’t care.

AC: Recently, you said that you would consider appointing judges who would overturn the Supreme Court’s decision on same-sex marriage. Do you think that with your statement, you have permanently alienated yourself from the LGBT community?

DT: I love gay men and women. They love me. I have many friends who are members of the LGBT community. In case they have forgotten, I approved the first-ever transgender person to compete in the Miss Universe (Canada) pageant. I do not have statistics but I am sure many gay men and women work for me in my properties and businesses in America and overseas. If we allow men to marry men or women to marry women, then we are worse than animals… well, okay that wasn’t original, that was Manny Pacquiao’s line. But I love Manny Pacquiao.

AC: Recently, Pope Francis said that “building walls” like what you plan to do along the U.S. Mexican border is un-Christian. Comments?

DT: Coming from someone who lives right in the middle of a walled city — The Vatican — Pope  Francis cannot be serious about his comments, I think.  Look, I don’t want to argue with the Pope. I love the Pope and all Catholics, and I know they love me.  I have many friends who are Catholic.

AC: Finally, what one message would you like to convey to our more than 21 Million readers and followers?