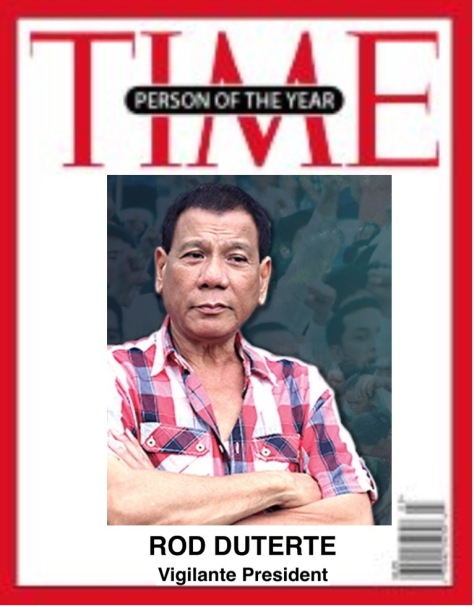 SYDNEY, Australia (The Adobo Chronicles, Manila Bureau) – Up until last week, almost no one outside of the Philippines knew who Rodrigo Duterte was.  He is, of course, the mayor of Davao City, who is running for his country’s presidency in the upcoming May 9 national elections.

But thanks to the power of the Internet, Duterte is now one of the most popular politicians worldwide.  Even mainstream media in Australia, Europe and North America are paying very close attention.

But the tough-talking, foul-mouthed Filipino politician is becoming the talk of the world for all the wrong reasons.  It was his comments making light of rape and murder that’s giving him the spotlight, and he is unapologetic about it. In those comments, he joked that he was mad that a beautiful female Australian missionary was repeatedly raped by many men before being killed.  He was mad because he believed that the mayor should have been first in line.

The Adobo Chronicles has learned that Time magazine is already considering naming Duterte as 2016 Person of the Year.  His only competition for the honor so far are the Filipino fanatics who overwhelmingly support his candidacy, and, of course, Donald Trump.

Once again, the Philippines is front and center on the world stage — outside of boxing and beauty pageants, that is — thanks to the mayor.

NEW YORK, New York (The Adobo Chronicles, Washington Bureau) – Ah, the beauty of Democracy. In America, you can vote — or not vote — for whomever you want.  Such is the case with two of Donald Trump’s children, Eric and Ivanka Trump. They are not voting for their father in the upcoming New York primary.

The siblings made this stunning announcement during a recorded television interview with Barbara Walters.

They missed the deadline to register to vote in the GOP primary, so sorry, dad, your kids ain’t voting for you.

CHAPPAQUA, New York (The Adobo Chronicles, Washington Bureau) – International Women’s Day was quite a day for Philippine Senator Grace Poe. On this very day, the Supreme Court ruled, by a 9-6 vote in her favor, paving the way for the foundling and former dual citizen to run for president.  The high court threw out the disqualification case against her by respondents who claimed she was not a natural-born citizen and lacked the residency requirement to run for the country’s highest office.

Just hours after she learned of the court decision, Poe received an overseas call from Hillary Clinton, former U.S. First Lady, Secretary of State and now candidate for U.S. president.,

During that 3 a.m. call, Clinton informed Poe that she was endorsing her candidacy for Philippine president and that she was looking forward to meeting her in person when both of them have become presidents of their respective countries. “I would love to be your roommate during the world leader summits that we will be both attending,” Clinton told Poe.

Today, Poe returned the favor and officially declared that she was endorsing Clinton not only for the Democratic nomination but for the presidency.

Poe said she is looking forward to be in the company of many women world leaders, adding that it was about time that women were taken more seriously to be heads of state.

If elected, Clinton will be the first female U.S. president, while Poe will be the Philippines’ third, following in the footsteps of Cory Aquino and Gloria Macapagal-Arroyo.