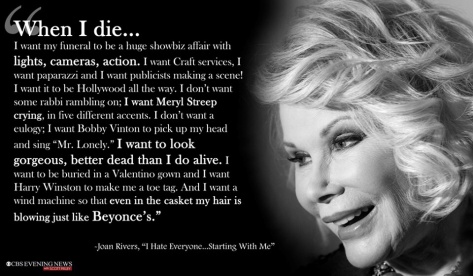 Los Angeles, California (The Adobo Chronicles) – Comedienne Joan Rivers is in hot water yet again after she told reporters that the 2,000 Palestinians  who have been killed in Gaza as a result of the Israeli-Palestinian conflict deserved their fate.

“They were told to get out. They didn’t get out. You don’t get out, you are an idiot. At least the ones that were killed were the ones with very low IQ’s,” she said.

Rivers, before her career was relegated to being the red carpet fashion police, was considered one of the more intelligent television personalities in the same category as Johnny Carson and David Letterman.

However, in an interview with The Adobo Chronicles, Rivers admitted that her  IQ has tremendously decreased over the last decade. She says she used to have an IQ of 150 which is considered anywhere between high and being a genuius.  Now she says that in the latest IQ test she took, she scored a measly 75.

“I think my age is getting the best of me, or perhaps I should be associating more with the likes of Jon Stewart,  Jimmy Kimmel or Jimmy Fallon,” she admitted.

She said she will try to call Palestinian President Mahmoud Abbas to personally apologize for her insensitive comments. 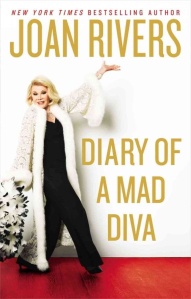 New York, NY (The Adobo Chronicles) – ‘Diary of a Mad Diva’ is the title of a new book by comedian and fashion police Joan Rivers, and it has broken all existing records for bestselling books.

The book is number one in the bestselling lists of The New York Times, The Washington Post, Chicago Tribune, Los Angeles Times, San Francisco Chronicle, People Magazine, Time, AARP Magazine, Congressional Quarterly, The Onion, and even the Guinness Book of World Records.

Thanks to the publicity stunt Rivers did during a live interview on CNN where she stormed out of the set in protest of what she called anchor Fredricka Whitfield’s ‘negative questions.’

But it was not just Rivers and her new book that benefited from the stunt. CNN’s declining ratings since the disappearance of Malaysia Airlines Flight 370 suddenly shot up to the roof of its Atlanta headquarters.

Rival cable networks Fox and MSNBC suspect that CNN was in on the stunt.