MANILA, Philippines (The Adobo Chronicles) – A Filipino aspirant for president made the Guinness World Record as the only candidate in the world to file his candidacy while asking the electorate not to vote for him.

Davao City Mayor Rodrigo Duterte addressed his countrymen in a video after he filed his certificate of candidacy (COC) for president in the 2016 elections. He joins four other major declared candidates in what could be the largest field of presidential aspirants in Philippine history: Vice President Jejomar Binay, former Interior Secretary Mar Roxas, Senator Grace Poe, and Senator Miriam Defensor-Santiago. Dozens of others have filed candidacies for president.

In his video message, Duterte, famous for his iron-fist and extra-judicial style of management, asked the public not to vote for him, making him what the Philippines’ Commission on Elections (COMELEC) is calling a “nuisance candidate.”

World record or not, political analysts are predicting Duterte might actually win the election .

It’s more fun in the Philippines. 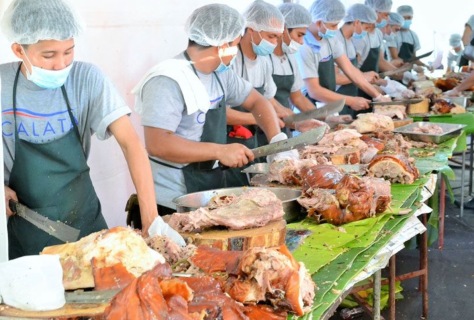 MANILA, Philippines (The Adobo Chronicles) – The Philippines has just earned another Guinness World Record for the largest serving of roast pork (lechon). The previous record was held by Mexico.

Some 4,045 kilos of roast pork was unloaded on Sunday at the Quezon City Memorial Circle, breaking the previous record set by Mexico in 2010 (3,094.2 kilos).

The event was sponsored by Calata Corporation, the country’s largest retailer and distributor of top agrochemical brands, feeds and fertilizers, which slaughtered 330 pigs.

The lechon was served to the public free of charge.

Guinness officials are still verifying if this Philippine record also qualifies as the largest serving of cholesterol.

This is the second pork-related Guinness World Record achieved by the Philippines.

The first was the distinction of having the largest pork barrel scam in the world. The scam, which involved elected and appointed government officials as well as private business persons, cost taxpayers a whopping Ten Billion pesos.

Aquino delivered his last SONA Monday night before a joint session of Congress. From his first word to the last, it took him two hours and ten minutes, beating all other lenghty SONAs anywhere in the world.

In the U.S., most presidents keep their State of the Union Address (SOTU) under one hour, although occasionally they would go over. President Bill Clinton holds the U.S. record for the longest SOTU for his January 27, 2000 address which ran for one hour, twenty eight minutes and forty nine seconds.

Aquino’s SONA was occasionally interrupted by brief applause, yawns, a sip of water and his smoker’s cough.

The Guinness World Record will go down in history as the greatest legacy of any Philippine president, dead or alive.