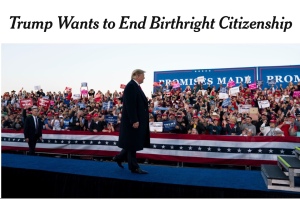 He hinted about issuing an Executive Order that would  throw out provisions of the Fourteenth Amendment to the U.S. Constitution which guarantees that anyone born in the U.S. and its territories are automatically considered American citizens.

Now, to complete the scenario, and in pursuit of his campaign promise of “America First,” Trump is reportedly considering reversing the status of all naturalized citizens.

”I think we can wait a little bit to reverse the citizenship status of those from European countries since they look more like us, Americans,” Trump said.