MANILA, Philippines – The Aquino administration has finally found a permanent solution to the Philippines’ nagging problem of homelessness: create new housing units for the homeless — in jail!

The  administration has rolled out its 22nd Public-Private Partnership (PPP) project involving the construction and maintenance of a P50.2-billion modern prison facility at Fort Magsaysay in Nueva Ecija, north of the capital.

The proposed facility could accommodate 26,880 inmates, including staff housing and administrative buildings, areas for rehabilitation (sports, work and religious activity), and would be installed with high security equipment. 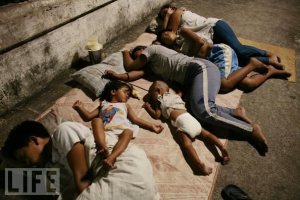 This is just the first of several initiatives to rid Metro Manila of homeless families and street children. Metro Manila has the highest homeless population in the world.

“There’s just not enough money to go around,” a presidential spokesperson said, “so the government needs to address one problem at a time.  Since we can’t build dwellings for the millions of homeless people, we think that building prisons will help address the problem.  In the prisons, inmates practically get a free roof over the heads plus free meals.”

The spokesperson added that the reason the new prison facility will be built in Nueva Ecija is precisely to decongest and rid Metro Manila of homeless families. “It will eliminate eyesores especially when we are have visiting dignitaries and tourists,” he said.

The Hague, Netherlands (The Adobo Chronicles) – The International Court of Justice (French: Cour internationale de justice; commonly referred to as the World Court or ICJ) has just released its 2014 list of the Top Ten Best Prisons in the World.

ICJ is the primary judicial branch of the United Nations. It is based in the Peace Palace in The Hague, Netherlands. Its main functions are to settle legal disputes submitted to it by states and to provide advisory opinions on legal questions submitted to it by duly authorized international branches, agencies, and the UN General Assembly.

This is the first year that ICJ is releasing the best prison list, based on an international survey it has commissioned to look at prison conditions in U.N. member countries.

The Philippines ranked No. 1 on the ICJ list, followed by Great Britain and Japan.

Reacting to the good news, Philippines Secretary of Justice Leila de Lima told reporters that her efforts to rid the country’s prison system of corruption and mismanagement have finally paid off. “We should treat all prison inmates with respect and dignity by providing them comfortable accommodations during their incarceration,” de Lima said.