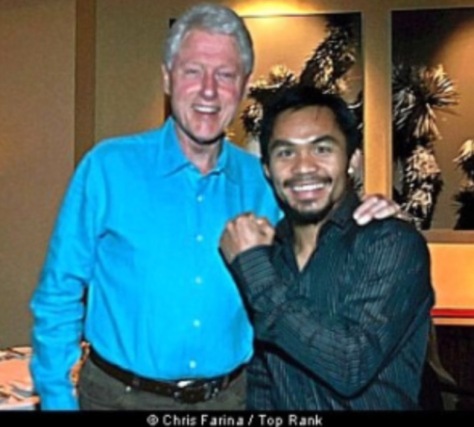 CHAPPAQUA, New York (The Adobo Chronicles, Washington Bureau) – Just days after Nike severed its relationship with Filipino champion boxer Manny Pacquiao for his disparaging comments comparing gay men and lesbians to (worse than) animals, former President Bill Clinton has distanced himself from the Filipino congressman who is running for a Senate seat.

The two are known to have a very cordial relationship, but all that is coming to an end.

Clinton said he cannot continue his friendship with Pacquiao because his views on homosexuality and same-sex marriage are contrary to Hillary’s position on the issue.

“Hillary and I cannot jeopardize her election as the next president of the U.S. by continuing our relationship with Pacquiao.

“I wish him the best in his quest to become a Philippine senator, but I have to withdraw my support for him and his senatorial campaign,” Clinton said. 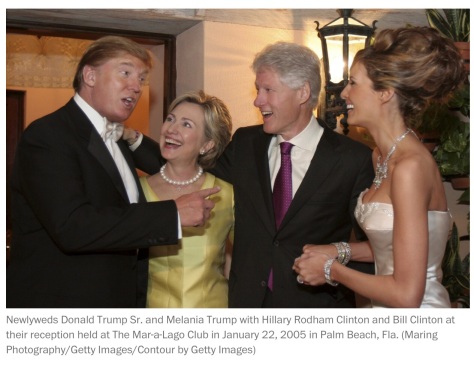 WASHINGTON, D.C. (The Adobo Chronicles® ) – It is a scandal worse than Watergate or Irangate. It’s called Electiongate. (And these scandals always happen in Washington, D.C., go figure!).

Today, The Washington Post  confirmed that former President Bill Clinton had a meeting with Donald Trump just before the real estate mogul announced his bid to become the next president of the United States.

In that meeting, Clinton reportedly encouraged Trump to assume a bigger role in the Republican Party.  And he did, by announcing his quest to be the GOP’s nominee for president in the 2016 elections.

The rest is history, with Trump now leading in the polls and maintaining his solid frontrunner status going into Thursday’s Republican presidential debate on FOX News.

But political analysts always knew that Trump, a former Democrat, had a special bond with the Clintons.  He had, in fact, made huge contributions to the Clinton campaigns and to Bill and Hillary’s global foundation.

So, with the Post‘s exposé, it can now be told that Trump’s candidacy is actually a Democratic Party ploy to ensure that Hillary Clinton will become the next president of the United States. Both Trump and the Clintons know that the former can never be elected president and that if he, indeed, becomes the GOP nominee, Hillary is assured of winning all the electoral votes in the 50 states.

And that, exactly, is the plan all along.  This thing called Electiongate.

Now we know why Trump has been making all sorts of stupid, racist and ridiculous comments in the campaign trail.

It remains to be seen whether ‘Electiongate’ will be brought up by the FOX News moderators in Thursday’s debate.

NEW YORK, New York (The Adobo Chronicles) – While Republicans are struggling to pick their nominee for president in the 2016 U.S. presidential elections, the Democrats are in a conundrum on who will be their vice presidential nominee.

But it is up to Hillary Clinton, not the Democrats, to pick her running mate. On Sunday, Clinton officially declared her candidacy for president. No other Democrat has expressed any desire to challenge Clinton.

Today, in her home state of New York, Hillary announced that she has picked husband Bill to be her running mate.

The U.S. Constitution limits the presidential term to a total of eight years, so Bill is ineligible to run again for president. But the constitution says nothing about a two-term president running for vice president!

Capitalizing on this constitutional loophole, Hillary picked her husband as her VP running mate.

“I think this would be the ultimate dream team; ” Hillary told reporters, “the American people will get two presidents for the price of one!”

There are amendments to the constitution that vaguely address whether or not a former two-term president can seek the vice presidency, and the Republican National Committee — caught offguard by Hillary’s announcement — is scrambling to challenge her choice of running mate.

The final decision may eventually rest with the U.S. Supreme Court.

In the meantime, Americans get two “everyday heroes.” Clinton and Clinton.