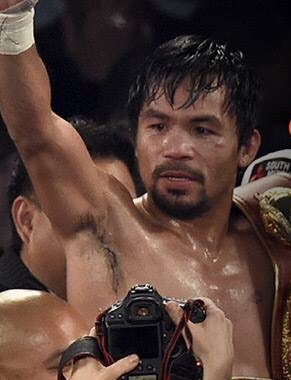 The 37-year-old Pacquiao, a congressman in the Philippines who is running for a senatorial seat in his country’s May elections, announced he was quitting the Senate race.

Like most people who decide to voluntarily retire from their chosen careers, Pacquiao said he wanted to quit on a high note, and quit as a winner. He didn’t want a loss in the elections to taint his victorious final bout in the ring.

We can’t blame him. It’s good for him. It’s great for the Filipino people.

LAS VEGAS, Nevada (The Adobo Chronicles,  San Francisco Bureau) – Filipino champion boxer Manny Pacquiao promised that he will allow Timothy Bradley to knock him out on April 9 if the American two-time former WBO welterwieght title holder campaigns for him on television.

Pacquiao is running for a seat in the Philippine Senate in the May 9 elections, but strict rules from the elections body (Commission on Elections, or COMELEC) prohibit candidates from using television airtime to campaign if it creates an undue disadvantage to other candidates.

So Pacquiao made a deal with Bradley, and Bradley agreed.

During their televised pre-fight news conference on Wednesday, Bradley publicly voiced his support for Pacquiao’s senatorial bid. “He is truly, truly, to me, the only one out there that’s gonna do right for the Filipino people,” he told reporters.

So, if you planning to watch Saturday night’s Pacquiao-Bradley fight in Las Vegas, we’re sorry to be a spoiler: Bradley will win by a knockout in the 7th round.

A deal is a deal.

MANILA, Philippines (The Adobo Chronicles, Manila Bureau) – Every time Filipino boxer Manny Pacquiao fights in the ring, it goes without saying that Filipinos will get to see him and his opponent.  Live. On TV. In the Philippines.

It has been said that each time there is a Pacquiao match, the Philippines comes to a standstill. Traffic becomes unbelievably light, crime rate drops to zero, everyone is glued to television sets, and even the anti-government rebels declare an unofficial ceasefire.

Well, that’s not going to happen when Pacquiao faces Timothy Bradley on April 9 in Las Vegas, Nevada —  his third match with the American welterweight champion.

It has to do with politics and Philippine law.

You see, Pacquiao, an incumbent congressman, is running for a Senate seat in the May 9, 2016 Philippine elections.  By law, candidates running for office must get equal time on television, which means that if shown on TV in the Philippines, the Pacquiao-Bradley fight will put all other Philippine Senate candidates at a disadvantage in terms of television exposure.

A commissioner of the Philippine Commission on Elections has already warned Pacquiao that if his fight is shown on TV in the Philippines, he will have to face serious consequences.

Rowena Guanzon said that Pacquiao will have to refrain from the boxing ring during his campaign for a Senate seat in the coming May 9 elections.

So, instead of dropping from the senatorial race, Pacquiao agreed that his fight will not be shown on Philippine television at all.

Pacquiao fans, however, are urging him to drop his senatorial bid instead so that they can watch his match with Bradley, live on TV, on April 9.