The Hague, Netherlands – The Philippine government has filed a formal petition with the United Nations, laying territorial claim to the countries in Polynesia.  The petition was submitted by the Philippines’ permanent representative to the U.N. Libran Cabactulan to the International Court of Justice located at The Hague in the Netherlands.

The petition came after the National Geographic published the results of a new research study on ancient chicken DNA which led to the conclusion that the Philippines could actually be the ancestral home of the Polynesians.

The researchers found that Polynesian chickens had their roots in the Philippines, making that region a candidate for the homeland of the mysterious Lapita people thought to be ancestral to Polynesians who transported the domesticated birds to the Pacific islands.

Philippine President NoyNoy Aquino ecstatically briefed reporters about the petition, saying that the territorial claim could be the highlight of his presidency. He added that the Philippines will abandon its claim to the disputed Spratly Islands in the West Philippine Sea, which are also being claimed by China.

Aquino said he would rather pursue the claim to Polynesia because it would mean the Philippines’ expansion to larger territories like Hawaii, Samoa, Tonga, Cook Islands, Fiji, New Zealand , and several other islands in the Pacific. “This would make the Philippines truly a world power,” Aquino said. 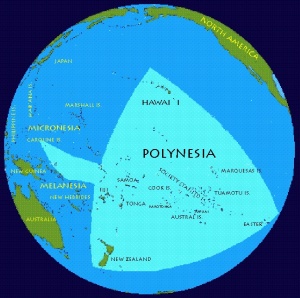 Samoa, Polynesia – The islands of Polynesia which include countries like Samoa, Tonga, Fiji and New Zealand among others, all boast of a rich culture, paradise-like terrain, natural resources, and unique traditions untouched by the technological advances of the Silicon Valley.

But Polynesia has a secret that Apple, Google and telecommunications companies like AT&T, Sprint and Verizon are not telling their customers and cult-like followers: in all of Polynesia, wi-fi does not cost a single penny.

Polynesia is composed of thousands of tiny islands spread over the vast Pacific Ocean. In fact, almost all the islands are volcanic formations produced by hotspots.

In Geology, hotspots are volcanic regions thought to be fed by underlying mantel that is anomalously hot compared with mantle elsewhere. The hot mantle causes a great deal of molten magma, the same material that causes volcanic eruptions. Hot mantle is known to freely transmit high-frequency airwaves similar to the ones used in wi-fi technology. Unknown to most smart phone addicts, the term “hotspot” precisely originated in Polynesia.

The people of Polynesia do not need to pay for Internet service or subscribe to hotspot access for their mobile phones and tablets, because of the natural hotspots in their islands.

Attracted and amused by the idea of not having to pay for wi-fi access, people from the U.S., Europe and Asia are flocking to the Polynesian islands to start a new life and new careers, free from the exhorbitant fees charged by their Internet service providers under their mandatory two-year contracts.

Here in Polynesia, the best things in life are still free, including wi-fi.