LOS BAÑOS, Philippines (The Adobo Chronicles) – The U.S. Food and Drug Administration announced Thursday that the AquAdvantage salmon — developed using growth hormone from Chinook salmon and a gene from an eel-like ocean fish that makes it reach market size twice as quickly as other salmon — has become the first genetically engineered animal approved for American consumption.

AquaBounty Technologies Inc., the Massachusetts company that created the fish, calls it “the world’s most sustainable salmon.” Opponents call it “Frankenfish.”

Almost simultaneously, scientists at the University of the Philippines at Los Baños, Laguna, announced that they have engineered a fast-reproducing, fast-growing pig that is both safe for human consumption and a big boost to lechon production.

Lechon is a popular way of cooking a whole pig by roasting it for hours over a pit of charcoal fire. No Filipino fiesta or family gathering is complete without this traditional delicacy.

The scientists said they have been successful in injecting testosterone from dogs into pigs to make them reproduce faster and become more prolific. A domestic farm pig averages 10 piglets per litter and can have two to three litters per year.

The genetically modified pigs will mature faster. At the same time, lechon roasting time will be cut by almost 50 percent.

MANILA, Philippines (The Adobo Chronicles) – Philippines Senator Nancy Binay is proposing a bill that would copy a newly-approved law in India which bans the slaughter of cows and the sale and consumption of beef in the western state of Maharashtra.

Hindus, who comprise 80% of India’s 1.2 Billion population, revere cows and the sale and consumption of beef is banned or restricted in many states.The state of  Maharashtra includes India’s commercial capital and biggest city, Mumbai.

Binay wants a similar law to apply to pigs in the Philippines.

The daughter of the Vice President says her bill will prevent future pork barrel scams which have plagued the country in the last two years. The scams siphoned  some Ten Billion pesos of taxpayer money into fake projects and nongovernmental organizations (NGOs) for the personal gain of some business people and politicians.

Several senators and high-ranking government officials are now in jail facing charges of corruption in connection with the pork barrel scandal.

“Kung bawal na ang kumatay ng baboy, eh di wala nang pork barrel,” Binay said. (If the slaughter of pigs is banned, then there will be no more pork barrel) 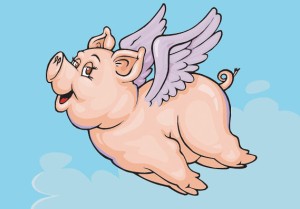 Manila, Philippines (The Adobo Chronicles) – Elsewhere in the world, pigs have wings and they can fly.  In the Philippines, they live in air-conditioned pig pens.

Binay, whose alleged involvement in the overpricing of the Makati City Hall Building 2 which began construction during his term as city mayor, is now being investigated for questionable property in his home province of Batangas.

During a Senate investigation into the overpriced city hall building, former Makati Vice Mayor Ernesto Mercado, presented a slide show of what he says is the Vice President’s properties in Batangas.  One of the properties showed a huge hacienda in Rosario, where Binay keeps horses, pigs and fighting cocks.

Mercado also showed a 5,000 square meter property with a mansion in the town of Laurel, which he says is also owned by Binay.

The Vice President has denied owning the properties.

Mercado added that the piggery is air-conditioned because Binay’s wife, Elenita, did not like the smell of pigs.

According to the latest polls, Binay is the leading potential candidate for President in the 2016 Philippine presidential elections.  The Vice President is said to focus his campaign platform on providing housing and improved living conditions for millions of poor Filipinos.  And yes, pigs as well.