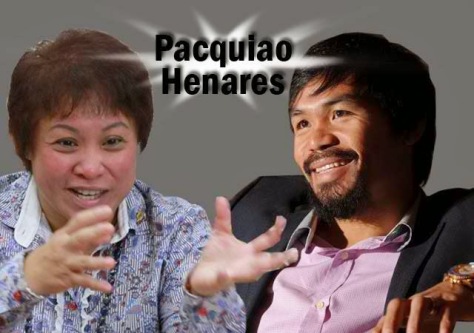 MANILA, Philippines (The Adobo Chronicles) – If you think the “Fight of the Century” is over, think again.

It is just unfolding in Manila, between Filipino champion boxer Manny Pacquiao and champion taxwoman Kim Henares of the Philippines’ Bureau of Internal Revenue (BIR).

In the last three years, Henares, BIR commissioner, has been going aftger Pacquiao for alleged tax deficiency now amounting to Three Billion pesos.   Because of the boxer’s failure to pay taxes, the BIR has now issued a levy and garnishment order which puts Pacquiao’s properties in danger of confiscation by the government.

Pacquiao has just announced his candidacy for senator, after having served as congressman representing his province of Sarangani. He holds the honor of being the top absentee Congressman.

If he becomes senator, he would go down in history as the highest tax-evading

LAS VEGAS, Nevada (The Adobo Chronicles) – There is no stopping the controversies following the May 2 ‘Fight of the Century’ between Manny Pacquiao and Floyd Mayweather.

A new, serious allegation has just surfaced: that Mayweather took prohibited drugs in his locker room at MGM Grand just before he entered the ring to face the Filipino boxer.

According to a news report, multiple bottles of the pill Muscle Rev were found in Mayweather’s locker room.

While the steroid-like pill is legal, many sports federations, including the World Boxing Association, have banned its use by their athletes.

If proven, the allegation could overturn the judges’ unanimous decision declaring Mayweather the winner of the controversial fight.

But Mayweather fans can breathe a huge sigh of relief.

Singer Justin Bieber has come forward to announce that those pill bottles were his, not Mayweather’s.

Bieber is a known fanatic of Mayweather, always standing beside the boxer  at ringside and in the locker room. 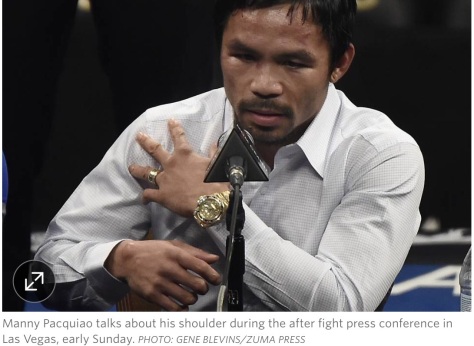 LAS VEGAS, Nevada (The Adobo Chronicles) – Until last weekend, it was billed the ‘Fight of the Century.’ But days after the Pacquiao-Mayweather welterweight fight unfolded in Las Vegas, it is now being called names like ‘Scam of the Century,’ and ‘Scandal of the Century.’

Today, in an unprecedented  move, the Nevada Athletic Commission voided the unanimous decision win by Mayweather over Pacquiao.

“There’s just too many missteps leading to and during the fight and we cannot sit here and just do nothing,” Commission Chairman Francisco Aguilar told The Adobo Chronicles.

In voiding the fight results, Aguilar presented a laundry list of what went wrong:

In addition, Aguilar said that numerous lawsuits  against Pacquiao, the boxing promoter and even the Nevada Athletic Commission have started to emerge, and “it is the commission’s responsibility to protect and preserve the integrity of professional boxing.”

RELATED STORY – Manny Pacquiao: From Rags To Riches To Rags