NEW YORK, New York (The Adobo Chronicles, Washington Bureau) – Talk Show host Ellen DeGeneres’ clothing line, GapKids X ED, is all about encouraging children to embrace what makes them unique. But it’s that “empowerment” aspect of the brand’s campaigns that left many confused by the most recent photos posted to GapKids’ Twitter account on Saturday.

One photo showed two white children doing acrobatic moves while a third, older white child leans her arm on the black child seen in the ad. Many people on Twitter took issue with the tweet, which reads “meet the kids who are proving that girls can do anything.” Many thought the photo had some “racist” overtones.

Upon learning of the criticism, DeGeneres immediately fired the advertising agency for her clothing line and asked an amateur photoshop artist to revise the ad.  Here is what the artist came up with.  DeGeneres reportedly really, really liked it! 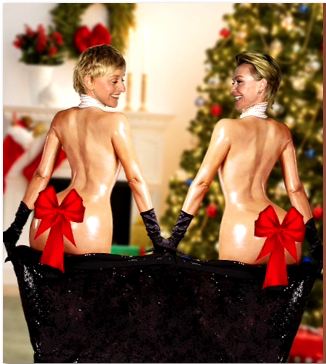 Kardashian’s photograph showing her oiled posterior graced the cover of the latest issue of Paper magazine and it has gone viral even before the issue was scheduled to come out.

It turns out that Ellen Degeneres and wife Portia De Rossi did it first.

Each year, Ellen and Portia print personalized Christmas cards that their fans can send to friends and family, and they design their own greeting card cover.  This year, they chose a photograph of themselves in the nude, in exactly the same infamous Kardashian pose on the Paper magazine cover.

“We order our greeting cards from Shutterfly months in advance of the holidays which, this year, we did way back in June.  And we came up with this crazy idea one day to show our oiled enormous posteriors.  We had fun doing it,” Ellen told The Adobo Chronicles.

Shutterfly donates a portion of the cost of the greeting cards to two of Ellen’s favorite charities.

Burbank, California (The Adobo Chronicles)- It all started with a tweet. A snapshot of a handsome teenager bagging items at a Target store in Dallas was posted by a tickled fan and it immediately went viral. Alex, now popularly known as Alex From Target, could not believe the number of his Twitter followers went from about 144 to more than half a million in just a couple of days. He’s been working as cashier at Target for only three months.

It pays to be an Internet sensation. Alex From Target was recently a guest of The Ellen Show, where he received an iPad gift from the generous Ms. DeGeneres. But it doesn’t end there. Ellen was so impressed by the smart and witty sixteen-year-old that she offered him a job as cashier at The Ellen Shop in Burbank.

A minimum-wage earner at Target, Alex will now be working for twice as much at The Ellen Shop. He will henceforth be known as Alex At Ellen. Perhaps, a television career also awaits him?