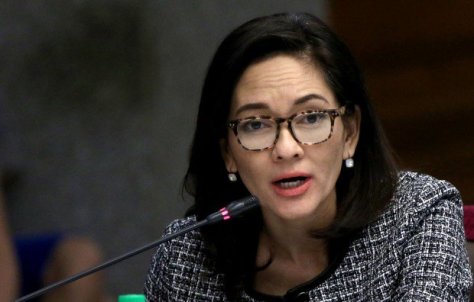 The two ex-Philippine officials under the NoyNoy Aquino administration co-signed a complaint against Chinese President Xi Jinping before the International Criminal Court (ICC) for alleged crimes against humanity in connection with China’s activities to gain control over most of the South China Sea.

Now, The Adobo Chronicles has learned that Senator Risa Hontiveros is being held by Immigration authorities as she arrived in Macau for a much-needed vacation.

A Macau Immigration official said Hontiveros was stopped from entering the city, which, like Hong Kong , is part of China, for being a persona non grata. The charge arose from the Opposition Senator’s public statement relating to the maritime incident in the West Philippine Sea between a Philippine fishing boat and a Chinese vessel.

In her statement, she criticized a planned joint investigation of the incident by the Philippine and Chinese governments, calling the outcome as “lutong Macau.”

”Lutong Macau” is a old (offensive, racist) Filipino expression that means something was rigged.