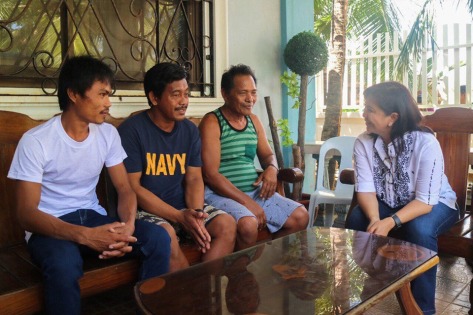 QUEZON CITY, Philippines (The Adobo Chronicles, Quezon City Bureau) –  Leni Robredo is being criticized for handing out P50,000 each to the 22 fishermen involved in the recent maritime incident in the West Philippine Sea. Was it a dole out, a PR stunt or a genuine gesture under the Vice President’s anti-poverty program, Angat Buhay?

In a hastily-called press conference, complete with merienda (snacks), the Office of the Vice President (OVP) justified the cash outlay.

”You see, Angat Buhay is Vice President’s flagship program. The cash gifts to the fishermen falls under the program because the incident involved a ship with a (Chinese) flag,” an OVP a spokespersom told reporters.

Meanwhile, the OVP is also considering reimbursing online news source Rappler for the Disney-type animation video it produced in the early hours following the maritime incident.