MANILA, Philippines (The Adobo Chronicles, Manila Bureau) – Antonio Trillanes has no hurt feelings towards President Rodrigo Duterte — despite the latter’s recent proclamation revoking the amnesty granted to the Senator and ordering his arrest.

The amnesty granted to Trillanes by ex-Presient NoyNoy Aquino was in connection with the Senator’s failed coup attempts in the past.

In a statement posted on his Twitter account, Trillanes hinted that Duterte is nearing sainthood (‘malapit na itong is Duterte’).

This is the first time that Trillanes made a public statement in favor of the President. 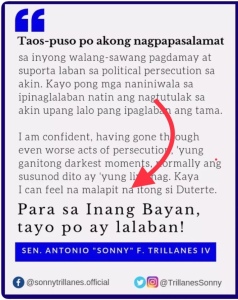 How does ‘Santo Duterte’ sound to our readers?  Let us know your thoughts in the comment section.