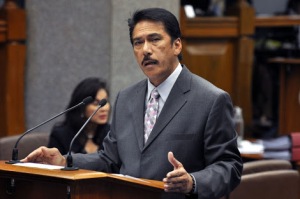 MANILA, Philippines (The Adobo Chronicles, Manila Bureau) – For someone who has been accused of lifting parts of Robert F. Kennedy’s speech for his own use in the Philippine Senate, Tito Sotto sure knows a lot about plagiarism.

Sotto has sent a message to the Inquirer asking that articles posted on its website regarding the Pepsi Paloma rape case, be taken down.

The articles, written by U.S.-based Inquirer columnist Rodel Rodis, insinuated that the Senator tried to exert some whitewashing over the case which involved Sotto’s brother Vic, and Joey of the Tito, Vic and Joey television tandem.

The Adobo Chronicles spoke to Sotto during a recess of yesterday’s Senate Session and asked him what his next move would be.

”If Inquirer doesn’t take down the articles, I have no choice but to sue them for plagiarism.”