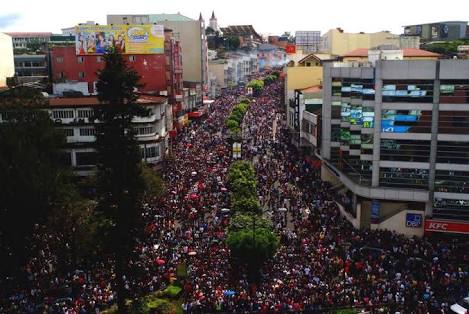 BAGUIO CITY, Philippines.   (The Adobo Chronicles, Baguio Bureau) – Year after year, event after event, the number of people attending pro-Aquino and anti-Duterte protest rallies has been diminishing.  This is a source of major, major disappointment for protest organizers who want to see massive crowds at these events.

Sunday, February 25 marks yet another anniversary of the EDSA People Power that toppled the regime of Ferdinand E. Marcos. Yet again, organizers have been very worried that only a few hundred people will show up.

So, in an effort to save face and to give the illusion that their anti-Duterte stance is alive and kicking, organizers have decided to move this year’s protest venue to Baguio City.

February 25 happens to be the day of the major street parade that is the culminating highlight of the month-long celebration of the city’s Panagbenga Flower Festival.  More than half a million people are expected to attend.

Organizers are encouraging anti-Duterte and Yellow minions to go up to Baguio to attend the February 25 celebration.

”We will be taking aerial photos of our protest along Session Road, Baguio’s main thoroughfare.  It will be an awesome display of people power,” they said.

Protest attendees are asked to bring a yellow-colored flower to the event — from sunflower to yellow rose. “Let’s paint the town yellow,” they added.