DAGUPAN CITY, Philippines (The Adobo Chronicles, Manila Bureau) – In the U.S., news outlets can make a prediction about the winner in an election just minutes after the polls close — based on exit polls.  In the Philippines, an election can be called for a candidate 15 days before the polls open.

That’s exactly what happened at last night’s third and final presidential debate held in Dagupan City, Pangasinan.  It was hosted by the ABS-CBN television network which has been accused of being biased in favor of the Liberal Party. (President Aquino’s sister and talk show host was a mainstay at the network before announcing her retirement).

In the heat of the debate, ABS-CBN journalist and moderator Tony Velasquez addressed Roxas as “Mr. Vice President” to the delight of the other candidates, incumbent Vice President Jojo Binay, Davao City Mayor Rodrigo Duterte and Senators Grace Poe and Miriam Defensor-Santiago.

One person who was not happy about the premature call was Leni Robredo who of course is the real candidate of the Liberal Party running for vice president.

So the race for president has now been reduced to four instead of five candidates.

DAGUPAN CITY, Philippines (The Adobo Chronicles, Manila Bureau) – “It’s not important how you came into this world. What’s important is what you did with your life.” With these words, former Interior Secretary Mar Roxas shed the signature yellow -t-shirt of the Liberal Party and donned a Batman suit.

Roxas’ new image is a last-ditch attempt to appeal to Filipino voters who will troop to the polls on May 9 to elect their next president.

The Roxas campaign has acknowledged that the party’s “Daang Matuwid” message has not resonated among Filipino voters who have been clamoring for a radical change in their economic life and personal security as well as an end to continued government corruption.

By portraying himself as a superhero out to save the Philippines from “the gates of hell,” Roxas hopes to play catch up with the frontrunners in the presidential race. President Aquino’s ‘anointed one’ says that in the remaining days of the campaign, he will focus on earning the trust and support of the country’s young voters and comic book fans. 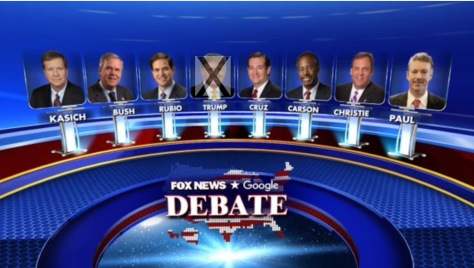 DES MOINES, Iowa (The Adobo Chronicles ) – A new Gallup poll conducted minutes after Donald Trump confirmed he would not be participating in the GOP presidential debate in Iowa already shows a winner : FOX News.

Trump’s refusal to join his Republican colleagues Thursday night was prompted by accusations that FOX News was biased against him, especially news anchor and debate moderator Megyn Kelly.

Ever since Trump announced his presidential bid, FOX News ratings have consistently plummeted because viewers didn’t want to hear any news about the billionare candidate or his stupid ideas. Television news audiences — Republicans included — have been turning to ‘The Daily Show’ With Trevor Noah which has been airing endless segments making fun of Trump.

Tomorrow’s debate could significantly bring back FOX News loyal viewers who have strayed away. And then some.