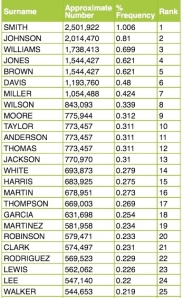 Washington, D.C. – Earlier this week, The Adobo Chronicles  reported that the Republicans in Congress have finally agreed to support comprehensive immigration reform through a bill that would grant amnesty to the estimated 11 Million undocumented immigrants in the U.S.

Today, we have learned about additonal details of the almost identical bills in the Senate and the House of Representatives.

A key provision of the bills spells out who will be given priority in legalization or citizenship.

Undocumented immigrants whose last names correspond to the top 25 most common American surnames will be given priority in applying for a green card and eventual citizenship. The provision does not make any distinction among surnames acquired by birth, marriage or through court-approved petitions.