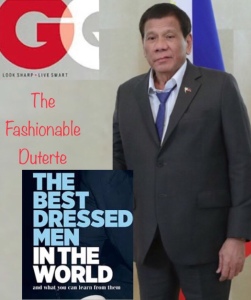 NEW YORK, New York (The Adobo Chronicles, New York Bureau) – He’s been vilified, insulted, even cursed by his critics for wearing a loose necktie during his recent meeting  with Russian President Vladimir Putin, and the news media called him “unkempt.”

But fashion gurus at GQ magazine think otherwise. They actually complimented Philippine President Rodrigo Duterte for his forward-looking fashion sense and rated him No. 1 among the world’s best-dressed men.

Duterte graces the cover of the upcoming issue of GQ magazine.

When reached by The Adobo Chronicles for comment, Duterte said he wasn’t really making a fashion statement. “I just wear what is comfortable.”