MANILA, Philipines (The Adobo Chronicles, Manila Bureau) – Leni Robredo says she is ready to be President come 2022, pointing out that she would not have agreed to run for Vice President if she felt she wasn’t capable of holding the highest position in the land, in case something happened to the President.

Upon hearing this latest public statement from Robredo, world leaders —from Barack Obama and Angela Merkel to Pope Francis and Hillary Clinton — reacted with gusto, and The Adobo Chronicles captured it all in photos: 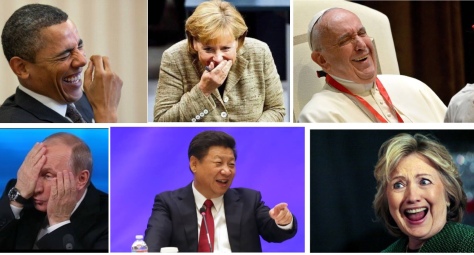