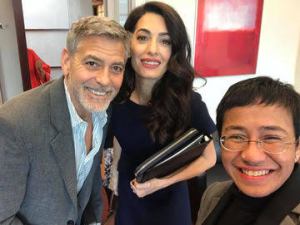 MANILA, Philippines (The Adobo Chronicles, Manila Bureau) – It is universal knowledge that any country reserves the right to allow or not to allow the entry of foreign nationals for whatever reason — even if that reason is unreasonable.

Dubious sources tell The Adobo Chronicles that Amal (Mrs. George) Clooney will be denied entry into the Philippines if ever she decides to visit with her new client, Maria Ressa.

It has recently been reported that Clooney, a  British-Lebanese Human Rights attorney, has joined Ressa’s legal team that will defend the Rappler CEO in her legal troubles, including tax evasion, cyber libel and Constitutional violation on media ownership in the Philippines.

Sources say that the Bureau of Immigration is looking at barring Clooney because of her expressed intention to practice law in the country which is not allowed for foreigners. Foreign nationals on tourist visas are prohibited from seeking or accepting local employment.

Well, Clooney will just have to meet her client in the U.K., Lebanon or the U.S. Ressa is a dual citizen of the Philippines and the U.S.