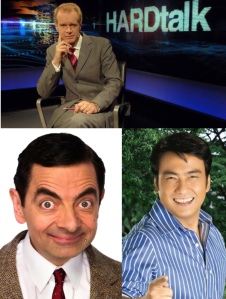 LONDON, United Kingdom (The Adobo Chronicles, Paris Bureau) – Stephen Sackur wants to do something different for an upcoming episode of his BBC talk show, “Hardtalk.” He wants a live showdown between Philippine Senatorial candidate Bong Revilla and British comedian Rowan Atkinson, more populary known for his TV character, Mr. Bean. Not an ordinary showdown, but a dance showdown.

The idea came from viral political campaign videos showing Revilla doing budots  dance moves as his way of courting votes. Mr. Bean apparently saw the videos and made his own to prove that he is a better dancer.
Sackur, who has endeared himself to Filipinos for his hard-hitting interviews with Philippine politicians like Senator Antonio Trillanes, says the dance showdown will be a first in British talk show history and could start a new trend not only in Great Britain but worldwide.
BBC has not announced a date for the television showdown.