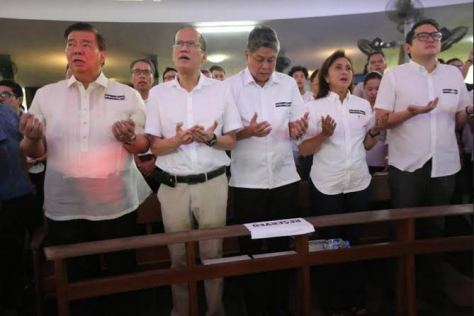 The event came on the eve of the expected proclamation Sunday of the winning Senatorial Candidates by the Commission on Elections. None of the Opposition slate calling themselves Otso Diretso made it to the winning Magic 12.

”Nakakabahala, pero kailangan nating respetuhin ang boses ng sambayanan,” Robredo said in a very emotional speech in lieu of the usual homily by the mass celebrant. (It’s disturbing but we have to respect the voice of the nation.)

Those in attendance at the Memorial Service included ex-President NoyNoy Aquino and defeated Senatorial candidates Bam Aquino and Mar Roxas. No other Otso Diretso candidates showed up.

All came dressed in white,  a neutral color.

When asked by The Adobo Chronicles to comment on the election results, the former President said, “Na-onse sa dose ang Otso Diretso” – loosely translated as “The Otso Diretso were scammed out of the (Magic) twelve.”

No future Opposition plans were reveled at the service, but this Liberal Party video was shown at the end of the event: