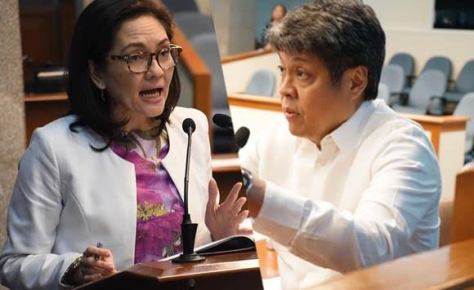 MANILA, Philippines (The Adobo Chronicles, Manila Bureau) – When you get your 13th month pay this December, don’t spend it all for your Christmas shopping.  This could be your last.

Opposition Senators Kiko Pangilinan and Risa Hontiveros have co-sponsored a bill that would abolish the 13th month pay beginning next year.

Many will recall that the law requiring employers to pay their employees a 13th month pay equivalent to their monthly salary was a brainchild of the late President Ferdinand E. Marcos.

Hontiveros told The Adobo Chronicles that the rationale behind their bill is to correct Philippine history and to nullify as many proclamations and executive orders issued by the late dictator.  She and Pangilinan believe that many of the laws passed under the Marcos regime were  unconstitutional.

Other Opposition Senators like Antonio Trillanes, Franklin Drilon, Bambam Aquino and Leila De Lima have indicated that they will support and endorse the new bill.