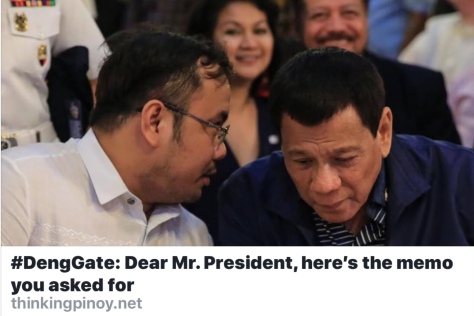 After firing staff of the Presidential Commission on Urban Poor (PCUP), President Rodrigo Duterte has appointed R.J. Nieto, a.k.a. Thinking Pinoy (TP) as his new Executive Secretary.  The President appears to be more all ears (see photo) to TP than to paid officials and staff at the palace.

For starters, T.P. just wrote and submitted a memo to the President  updating him on the hot-button issue of Dengvaxia, the Dengue vaccine manufactured and distributed by the French Senofi Pharmaceuticals.

Dengvaxia was administered to more than 800,000 school kids under the free Dengue vaccination program launched by the PNoy administration.

Senofi has acknowledged that the vaccine could cause severe Dengue among those innoculated but have not had a previous episode of the disease.

It wasn’t clear whether Executive Secretary Salvador Medialdea will remain in his post or will be given another appointment.

The Adobo Chronicles tried to reach Medialdea for comment but we could not locate him in Baguio City where he was reportedly scouting for a newer and bigger summer residence for the Office of the Executive Secretary.