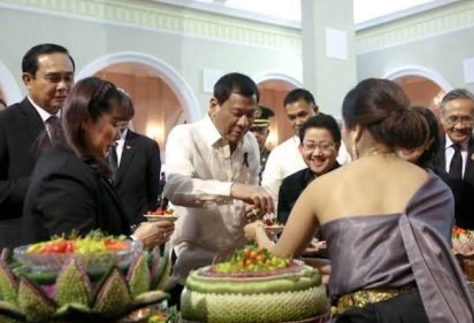 In a post on Facebook, presidential spokesperson Harry Roque Jr. said Duterte was not able to attend the dinner as he was “attending to urgent ASEAN hosting matters” and “coordinating safe recovery of Vietnamese captives of the Abu Sayyaf.”

Almost immediately, social media was abuzz with speculation and sarcasm on why Duterte skipped the gala dinner.

One netizen in particular asked if Duterte skipped the gala because he didn’t know how to use a spoon and fork. Writer Ninotchka Rosca shared the post/question.

”The reason Duterte skipped the Gala dinner was not because he didn’t know how to use a spoon and fork.  Rather, the other heads of state didn’t know how to eat with their hands.  So rather than make the APEC leaders uncomfortable, he decided to skip the dinner.

Such a gentleman, this Duterte!