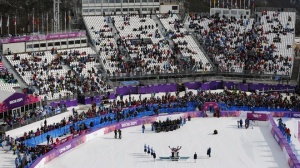 Sochi, Russia – Russia is trying hard to put its best foot forward in hosting the 2014 Winter Olympics, but scenes showing empty seats at the Iceberg Skating Palace and other venues are causing a big headache for President Vladimir Putin and Russian Olympic officials.

In an emergency meeting held at the Kremlin, the Russian government has decided to suspend all travel visa requirements as well as give away Olympic venue tickets in order to fill the empty seats. It is also considering subsidizing airfares from anywhere in the world to Sochi for the next two weeks.

The Putin government has also reportedly paid NBC and other media companies covering the winter games to refrain from photographing or aiming their television cameras at the empty seats during all scheduled events.