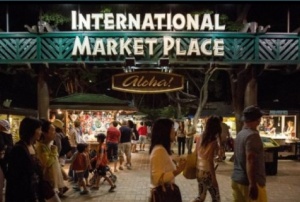 Honolulu, Hawaii – Waikiki residents and frequent visitors alike were taken by surprise at the announcement that the International Market Place has permanently closed as of January 1, 2014.  It is considered the last hold-out among open-air, under-the- banyan-tree places that defined this top-rated tourist destination in Hawaii. It featured small businesses in wooden stalls selling wares from t-shirts, to pearl jewelry to ukuleles. It was a “people’s park” in a sense, where ordinary people shop for inexpensive souvenirs and partake of diverse fast-food menus at its food court. In its place, Saks Fifth Avenue will build a new several storey department store.

Well, it appears this is just the tip of the iceberg.  Starbucks has just announced that it is purchasing all of the ABC stores in Waikiki – that means two or three in every block or corner of Waikiki’s major thoroughfares like Kuhio and Kalakaua Avenues. Effective February 1, 2014, all ABC Stores will become Starbucks Coffee Shops.  Starbucks has , however, assured everyone that it will add Kona coffee to its regular menu to keep the Aloha spirit in their business. It will also offer spam sushi as part of its breakfast menu, as well as macadamia nuts for its snacks. In place of its iced coffees, Starbucks will offer shaved ice coffees.

One thought on “STARBUCKS TO PURCHASE ALL ABC STORES IN WAIKIKI”