Sacramento, California (EXCLUSIVE to The Adobo Chronicles) – Here in the most radical state of the U.S., shark’s fin and foie gras (fattened duck or goose liver) are already banned, thanks to legislation passed and signed into law within the  last two years.

California’s law that prohibits the sale, possession, trade, or distribution of shark fins went into effect in July this year, ending the longtime Chinese custom of serving shark’s fin soup. On the other hand, a federal appeals court ruled last September that California can keep in place its ban on the sale of foie gras. The law prohibits state farmers from force-feeding birds with a tube, a procedure used in producing foie gras. The law also prohibits the sale of the delicacy.

Now, in a new move that would inarguably seal California’s reputation as the world’s top melting pot of progressives, conservationists, environmentalists, human and animal rights activists,  a bi-partisan group of state assemblymembers is proposing a new set of  legislative bans.

The proposed bill will prohibit the sale of lechon (Filipino roasted pig), roasted duck and boiled crab throughout the state. The legislators cited the inhumane procedures used in cooking or displaying these traditional delicacies.

Suckling pigs are  bound and skewered in one whole piece before being roasted for hours over a fire pit. Live crabs are boiled in huge pots. Roasted ducks, on the other hand, are displayed stark naked in windows of Chinatown restaurants and food shops, hanging in iron hooks.

The lawmakers were one in saying that “the preparation and cooking procedures for these food items are cruel and have no regard whatsoever for the dignity of these poor creatures.” 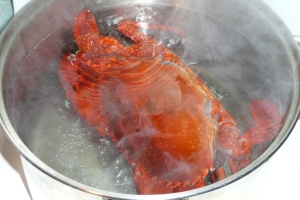 The Adobo Chronicles learned that this is just the beginning of a series of legislation that will look into other inhumane practices used in California’s multi-ethnic and diverse food and restaurant industry.

California voters concerned about other cuisine practices are urged to contact their assembly representatives. A toll-free hotline has been established for this purpose: 1 -000- BAN FOOD.