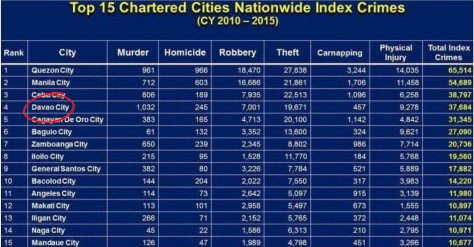 DAVAO CITY, Philippines (The Adobo Chronicles, Manila Bureau) – Philippine presidential candidate Rodrigo Duterte  is running on a campaign platform of peace and order, projecting himself as the crime-fighting mayor of Davao City. His supporters often highlight the low crime rate in Davao as proof of his abilities to tackle crime.

But a recent report released by the Philippine National Police shows Davao as the fourth among chartered cities with the highest crime rate from 2010 to 2015. Worse, Davao had the highest number of murders.

So now begs the question: Are the mayor’s supporters supporting a myth?

The other question in people’s minds: Did the Aquino administration have anything to do with the release of this report — just a little over a month before the May 9 elections — in order to boost the low ratings of its anointed candidate Mar Roxas? Just asking. 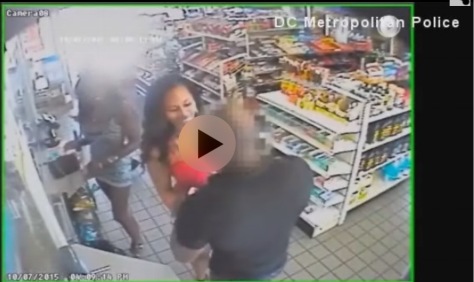 WASHINGTON, D.C. (The Adobo Chronicles) –  Miley Cyrus, be warned.  Twerking is now a crime in the U.S. and could take you behind bars.

The Washington, D.C. police is asking the public’s help in identifying two women accused of twerking at a convenience store the other day.

The crime was captured on closed circuit camera.  The evidence showed two women sexually molesting a male stranger who was talking on his cell phone.  At one point, one of the women twerked the man who wanted nothing of it.

If you recognize any of the women, you are advised to call the D.C. police.

Let’s bring these twerkers to justice!

A 17-year-old boy is facing 10 years in prison after being charged as an adult for having sexually explicit photos of a minor – himself.

“In North Carolina you are considered an adult at 16 years old as far as being charged,” said Sgt. Sean Swain of the Cumberland County Sheriff’s Department. “But to disseminate and receive sexually explicit texts, photos or videos, you must be over 18.”

So when in North Carolina, be discreet when taking selfies, especially if you’re under 18. You will not only be diagnosed with selfitis. You will also be put behind bars.