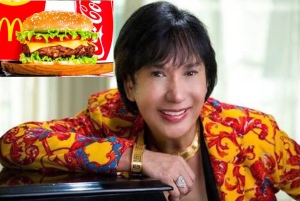 The American fast-food chain came up with the new concept after a video surfaced on social media where the renowned, openly-gay hairstylist, philanthropist and businessman chastised fellow gay Filipino men .

Asked about the bill seeking to protect LGBT people from discrimination which is now pending in Congress, Reyes said, “Kung ikaw ay may nota, sa lalaki ka. ‘Pag may kipay ka, sa babae ka. Nirerespeto kita bilang tao, nirerespeto kita bilang bading, pero lumugar tayo sa tamang lugar.” (If you have a penis, you are a man. If you have a vagina, you are a woman. I respect you as a person, I respect you as a gay man, but let’s stay in our place.)

“Kung nagpa-opera ka, ang bakla, miski may kipay na, may boobs na, bakla pa rin ang utak niyan,” he said. “Gilingin mo man ‘yan, ang labas niyan baklang hamburger.” (Even if you’ve undergone surgery, a gay man, even if he has a vagina, or boobs, he still thinks like a gay man … Even if you grind them, they will come out as gay hamburgers.) 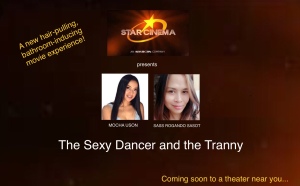 MANILA, Philippines (The Adobo Chronicles, Manila Bureau) – Apparently, it is not only Maria Ressa and Rappler who don’t get satire.  Neither does Facebook, and by extension, Mark Zuckerberg.

Yesterday, Facebook suspended the account of The Adobo Chronicles because of a FB post of a mock new film featuring ‘feuding’ major bloggers, Mocha Uson and Sass Rogando Sasot. The two have been exchanging barbs on their social media accounts over the SOGIE bill (Sexual Orientation and Gender Identity Expression.)

In its FB post, The Adobo  Chronicles satirized the feud by announcing a “new film” titled “The Sexy Dancer and the Tranny”  featuring Uson and  Sasot. It wasn’t  clear whether it was the “sexy dancer” or “tranny” that it considered hate speech. (Uson had been described as a “sexy dancer” by mainstream media and some social media bloggers while Sasot is a self-identified transgender woman.)

“Tranny”  may or may not be considered derogatory by the trans community, as evidenced by THIS.  Our sources also confirmed that many transgender women refer to themselves as “trannies” especially when talking amongst themselves. It is almost a “term of endearment” just like many gay men call each other “homos.”

RELATED: “Suspended but not Silenced.” 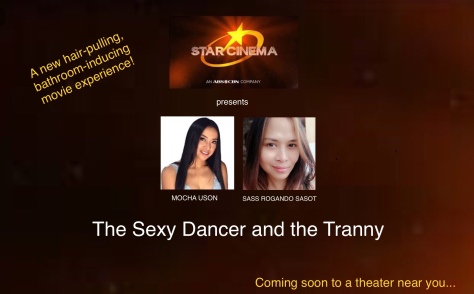 The film. “The Sexy Dancer and the Tranny,” stars two of the country’s bloggers, Mocha Uson and Sass Rogando Sasot. Uson has had films to her credit before but this is Sasot’s first venture into the movie world.

The film is produced by ABS-CBN’s Star Cinema, which said it will be a “hair-pulling, bathroom-inducing movie experience” that movie-goers shouldn’t miss.

”Hair-pulling” obviously refers to a past Star Cinema film, “Four Sisters and a Wedding” which featured a hair-pulling encounter between Uson and Angel Locsin.

”Bathroom-inducing” is in reference to the public toilet controversy involving transgender woman Gretchen Diez which sparked a national debate on SOGIE, the Sexual Orientation and Gender Identity Expression bill now in the Senate.

Sasot supports the bill but Uson says the bill needs to be looked into before being made into law, sparking heated online conversations between the two bloggers who are supposed to be good friends.

Sasot identifies as a transgender woman while Uson admits to being bisexual in the past.