BAGUIO CITY, Philippines (The Adobo Chronicles, Baguio Bureau) –News media reports indicate that after the successful rehabilitation of Boracay and ongoing efforts in Palawan and other beach destinations, the government is now setting its sights on the highlands, in the country’s so-called Summer Capital, Baguio City.

The city government led by Mayor Benjamin Magalong has prohibited the cutting of trees and ordered a stop to all new construction of homes and office buildings as he sets out to turn Baguio into a “smart city,” according to Tourism Secretary Bernadette Romulo-Puyat.

To revive the City of Pines, the city and national governments also plan to relocate structures, mostly private homes, that have been built along the slopes, to new developments being planned in the outskirts of the city and neighboring municipalities, Puyat said.

The Adobo Chronicles has learned that part of the grand scheme is to relocate the sprawling SM Baguio Mall built on top of Luneta Hill to a still undisclosed location far from the hustle and bustle of downtown Baguio. 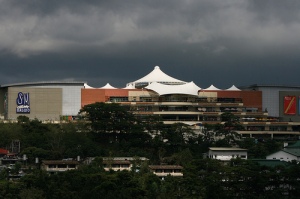 ”Come of think of it,” Magalong said, “the reason Baguio is experienceing this horrendous traffic is because practically all roads lead to SM.  Take out SM and you solve the traffic problem instantly,” he said.

In lieu of the shopping mall, the Department of Tourism will build what it is calling “Park on the Hill” which would would put to shame New York City’s Central Park.

It’s back to “The City of Pines” for Baguio!