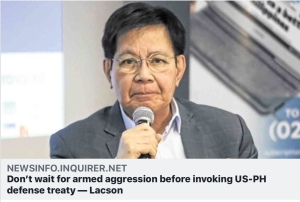 MANILA, Philippines (The Adobo Chronicles, Manila Bureau) –Senator Panfilo Lacson on Tuesday said the government should not wait for armed aggression to happen in the West Philippine Sea (WPS) before invoking the Mutual Defense Treaty (MDT) between the Philippines and the United States (US).

Lacson’s statement stemmed from the Reed Bank incident in which a private Chinese vessel rammed a Philippine fishing boat in the West  Philippine Sea.  Many analysts are interpreting his statement to mean that the Philippines, with the aid of Uncle Sam, should go to war now with China, with or without any military confrontation with the Asian giant.

Lacson hopes that by his posturing with the  U.S. , he will gain points in his rumored bid to succeed Philippine President Rodrigo Duterte whose 6-year term ends in 2022.

These are indeed bery exciting times…