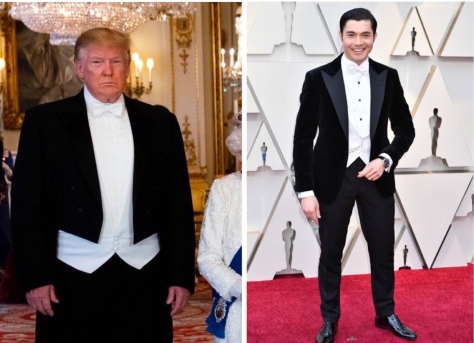 LONDON, United Kingdom (The Adobo Chronicles, Paris Bureau) – When in Rome, do as the Romans do.  When in Great Britain, wear a tuxedo as the British do, especially when you’re visiting the Queen.

Most everyone has now seen a photo of US President Donald Trump wearing a tux to Buckingham Palace.  It was hard to figure out whether he was wearing an oversized vest or an undersized coattail, but his wardrobe malfunction has not escaped the discerning eye of the world’s fashion police,

So, The Adobo Chronicles asked Henry Golding, star of ”Crazy Rich Asians,” who by the way is half-British, to model for us and show Trump how to wear (or not to wear) a tux.