MANILA, Philippines (The Adobo Chronicles, Manila Bureau) – It was a  cryptic message, interpreted by many as a Magdalo-type threat to overthrow the government by staging yet another coup attempt.

It started with this Twitter message from defeated Opposition Senatorial candidate Gary Alejano: 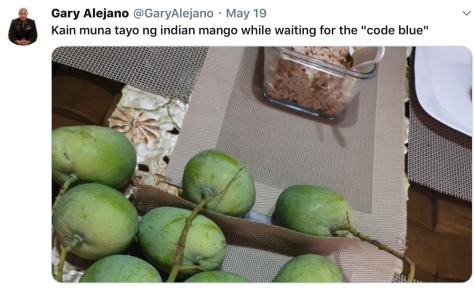 In a hospital setting, Code Blue is called  when a patient isn’t pumping the oxygenated blood he or she needs to survive. It is likely due to cardiac or respiratory arrest.

We asked code experts to try to make sense of Alejano’s tweet and this is their analysis:

”Remember during the campaign when Alejano and several other Otso Diretso Senatorial candidates staged a mock jet ski trip to Scarborough Shoal?  Blue is the color of ocean.”

”So when Alejano mentioned about waiting for Code Blue, he meant waiting for clearance from Opposition leaders like VP Leni Robredo and LP President Kiko Pangilinan to cross the blue ocean to  go into self-exile in the South Chin Sea.”