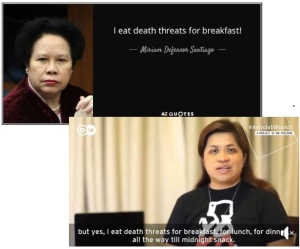 MANILA, Philippines (The Adobo Chronicles, Manila Bureau) – It was a quote worth all the publicity: Pinoy Ako Blog’s Jover Laurio claiming that she eats death threats for breakfast, lunch, dinner and even for midnight snacks. It could have easily won public sympathy.  Well, maybe.

But one thing went wrong. It was not original.  It was a quote first attributed to the late Senator Miriam Defensor-Santiago.

So now, Santiago’s  Estate is suing Laurio for plagiarism.

While plagiarism in itself is not a crime, plagiarism that also amounts to copyright infringement is. Such plagiarism carries a penalty of 3-6 years imprisonment and a fine of P50,000 – P150,000 if prosecuted under the law.

Laurio has reached out to former Solicitor General and now Senatorial candidate Florin Hilbay, hoping that he would be her defense attorney on a pro-bono basis.  After all, she and Hilbay share the same Yellow color.