Such is the case with Filipino entertainment personalilty Kris Aquino who played a cameo role in the blockbuster Hollywood movie, ‘Crazy Rich Asians.’

Speaking to her fans and followers through her Instagram account, Aquino revealed that she was the victim of deception by no less than her trusted, but still unnamed, business partner.  The ‘Queen of all Media’ admitted that she has lost a lot of weight due to the stress of losing millions of pesos. 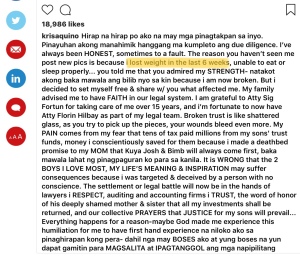 But don’t despair, Ms. Aquino.  Our informed sources tell us that a Hollywood production company is planning to make a new movie titled, “Crazy Thin Asians.”  Maybe this time, you will be the main star.