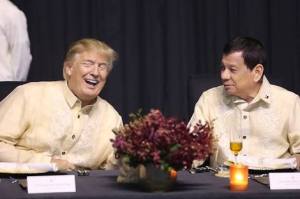 WASHINGTON, D.C. (The Adobo Chronicles, Washington Bureau) – It is the proverbial 3 a.m. call that only heads of state are expected to make to settle urgent world issues.  That’s exactly what happend at 3 a.m. this morning, Philippine Time (3 p.m. Washington time).

U.S. President Donald Trump called Rodrigo Duterte to offer his unequivocal support for the Philippine President after the latter was widely criticized for kissing a Filipina lady on the lips during a meeting with the Filipino community in South Korea.

”Don’t your critics have better things to do,” Trump reportedly told Duterte.  “I fully understand your predicament. It happened to me during my campaign when an audio tape was leaked to the news media where I had commented that I grab women “by the p*ssy,”  “I can definitely relate,” Trump added.

Trump said he was 100% behind Duterte, chastising the news media for not having any idea on what Presidents  go through every day. “They like to make a mountain out of a molehill.  Well, they can go to hell.”