MANILA, Philippines (The Adobo Chronicles® ) – Yesterday, we announced our choice for the best and worst-dressed at the State of the Nation Address (SONA) red carpet ceremonies held last Monday . We named Senator Nancy Binay the best-dressed and Senator Loren Legarda the worst.

Based on new information we just received, we have revised our choice for best-dressed.  The award now goes to Representative Leni Robredo, widow of the late  Interior and Local Governments Secretary Jesse Robredo. 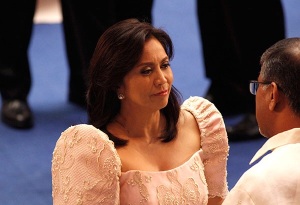 We arrived at our new choice after we found out that Robredo sneaked out of the red carpet and used the back stairway to get into the assembly hall. A photographer caught the great escape and the photo has now gone viral on social media.

We understand that the red carpet-shy Robredo has been doing this for three years in a row now, except that this hear, she was caught in the act.

We congratulate Robredo for this honor.