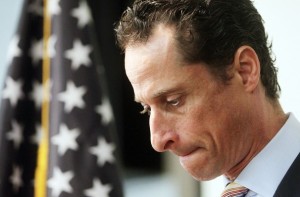 New York City – As New York City mayoral candidate Anthony Weiner continues to fight to stay in the race, a newly-released tweet obtained by The Adobo Chronicles is said to be the final straw in the former Congressman’s sexting scandal.

The controversial tweet, contained the phrase, “Call me maybe, baby” with a link to a self portrait of Weiner with no clothes on except for his smartphone barely covering his frontal private parts.  There was one big problem with this tweet.  He mistakenly sent it to “@lesbiebaby.”  On the receiving end of this tweet was Christine Callaghan Quinn, the first female and first openly- gay current Speaker of the New York City Council,  another candidate for mayor.

In the latest poll, Quinn is the frontrunner and Weiner has dropped from first  to fourth place.