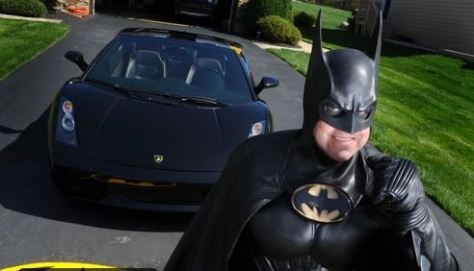 ANNAPOLIS, Maryland (The Adobo Chronicles® ) – As children, we were told that Superheroes never die, but now we know it’s a total myth.

Lenny B. Robinson, 51,  who visited children in hospitals dressed as Batman and entered the public spotlight after police pulled him over in costume, died Sunday after a car hit his custom Batmobile on a Maryland interstate.

His custom Lamborghini broke down while he was driving east on I-70 in the fast lane. He got out to check the engine while still in the lane, and a Toyota Camry struck his car, which in turn hit him.

In the world of Marvel, Superman could have come to Batman’s rescue and pull him up and away from impending death.

But this is the real world.

Yet, truth be told that in the real world, there are real heroes, and Robinson was among them.

CALAMBA, Philippines (The Adobo Chronicles® ) – Filipino Herbert Chavez from Calamba, Laguna in the Philippines has, in the last 18 years, undergone a total of 23 surgeries, including nose jobs, skin-whitening, liposuction and jaw realignment to look like his idol, Clark Kent, a.k.a. Superman.

The 37-year-old fan also wears blue contact lens to reflect the blue shade of his superhero costume. To top it all off, he’s been injecting his abs and chest with a filler-type product called MesoLipo, which is illegal in the US.

He has reportedly spent a whopping 300,000 Pesos (US $ 6,639) for his surgeries which is really a bargain compared to the amount of money Hollywood actors and actresses spend for facelifts and reconstructive surgery.

Well, all those years and money have finally paid off.

Today, Chavez received a phone call from Zack Snyder, director of the upcoming film, “Batman vs. Superman: Dawn of Justice,” informing him that he has been cast for the next film in the Superman series.  Chavez had sent Snyder an audition video and the Hollywood director was super impressed.

The upcoming Superman film, which stars Henry Cavill and Ben Affleck is scheduled for release in March of 2016.  The new film with Chavez starts shooting immediately after that.

Chavez will go down in history as the very first full-blooded Filipino to be the lead star in a major Hollywood blockbuster film.