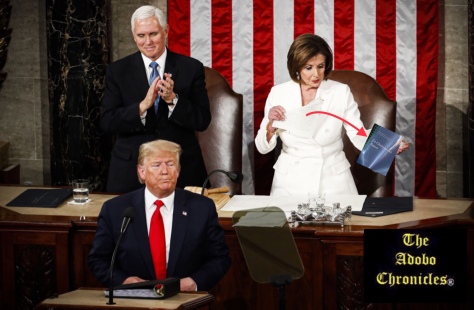 Americans were divided over the incident, with many criticizing her and  others applauding her courageous act.

But now, it seems the viral video clips were altered!

The Adobo Chronicles  obtained an unedited version of the clips which showed a different story.

Apparently, just before the start of SOTU, the Philippine Ambassador to the U.S. handed Ms. Pelosi a copy of Vice President Leni Robredo’s report on her two-week stint as drug czar.

Because Pelosi got so bored listening to Trump’s speech, she took the opportunity to browse through Robredo’s report.

At the end of Trump’s speech, Pelosi was seen tearing up pages from the Robredo report.

The Adobo Chronicles reached out to Pelosi for comment.  She simply said, “The report is a manifesto of mistruths.”