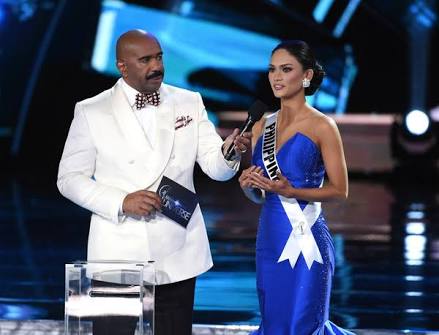 ATLANTA, Georgia (The Adobo Chronicles, Atlanta Bureau) –  Television host Steve Harvey will go down in history as the guy who announced the wrong Miss Universe winner.

We’re talking of course about that prime-time moment in 2015 when Harvey announced Miss Colombia as the new Miss Universe when in fact, it was Miss Philippines who won the crown.

While this year’s Miss Colombia told Harvey that the Colombian people have forgiven him for his gaffe, the host said “the Cartel hasn’t forgiven me.”

The Adobo Chronicles has just learned that in a backstage conversation between Harvey  and Miss Philippines about the same gaffe, the host told Gazini Ganados that while he thinks the Filipino people have forgiven him, President Duterte has not.

To add insult to injury, Harvey, in announcing this year’s winner of best national costume, mentioned Philippines, when in fact, the real winner was Miss Malaysia.

The Miss Universe Organization should fire either Harvey or the teleprompter.  One is enough. Two is too much.