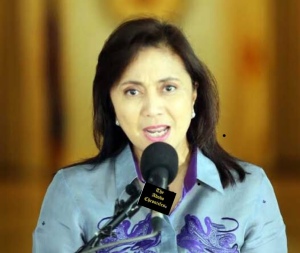 MANILA, Philippines (The Adobo Chronicles, Manila Bureau) – In her fiercest attack yet on Rodrigo Duterte, Leni Robredo is calling the President a copycat of the late Cory Aquino.

Robredo was reacting to Duterte’s recent statement that if provoked, he will declare a revolutonary war to deal with government corruption.

Aquino declared a revolutionary government when she took over as President from the deposed Ferdinand E. Marcos.

’We have to follow the Constitution, unlike Cory,” she added.

Political analysts are confused about Robredo’s statement. They weren’t sure if the VP was criticizing Duterte or Aquino.